Extra syrupy Greek coconut cake (Ravani cake) – The secret is in the syrup!

Revani or ravani cake (Greek coconut cake) is a traditional Greek dessert which falls under the category of ‘Siropiasta’, which means syrupy Greek desserts. Syrupy Greek desserts are very popular among Greek cuisine and with good reason! From extra syrupy cakes like portokalopita, karidopita or ravani to traditional Greek Christmas desserts, like melomakarona or diples and of course the famous traditional Greek baklava dessert. One thing all these Greek desserts have in common is of course the moist of scented syrup, which makes each one just irresistible!
Prepare the syrup for the Greek coconut cake (ravani) recipe:  To achieve the perfect texture for the syrup of the ravani cake, you should never blend or stir the syrup, while it is boiling. Just bring to the boil, let the sugar dissolve in the hot water and boil for 5-10 minutes, until the syrup thickens a little bit. When adding syrup to the ravani cake, always make sure that the cake is cold and the syrup is really hot. Ladle really slowly the hot syrup over the cold ravani, enabling each ladle to be absorbed, so that the syrup is absorbed evenly. Even though it will be really hard.. you should wait for the ravani to cool before cutting into pieces, or else it will crumble. Ideally serve this Greek coconut cake cold from the fridge the following day.

The Barking Blondes – Be Dog Friendly

How frustrating was it this week, when, while on a shopping spree with our British bulldog, we were asked to “take the dog outside”.
No, this wasn’t a restaurant or a supermarket but a camping shop selling merchandise suited to outdoor activities. Obviously this chain of stores hasn’t realised the value of the hound pound and the saying, ‘Cutting off your nose’ springs to mind.
So we welcome The Kennel Club’s new campaign “Be Dog Friendly” encouraging all businesses to welcome dogs.
We like to take our bull breeds with us wherever we go, whether on holiday or just for a quick blast of retail therapy so we definitely give this the thumbs up. And savvy enterprises should sign up!
Look at the  research behind this initiative . The staggering fact is that 71 per cent of dog owners actually don’t go on holiday, opting for a ‘staycation’ because often its just too complicated to take fido with us. Those of us that do venture away, leaving our beloved pooch in kennels, suffer such guilt and worry that 32 per cent claim never want to leave them behind again. The study also revealed that 80 per cent of dog owners won’t go abroad at all, preferring to holiday in a motor home or camping – just to be with their dog for a well earned summer break.
There are over eight million dogs in Britain, and these statistics suggest that hoteliers are missing a trick. The value of the hound pound has boomed despite the recent economic downturn. So why then is it that many establishments are so dog hostile? With about five million dog owners in Britain, this equates to a significant potential revenue for businesses.
Dog ownership is now at its highest proving we are choosing dog companionship and looking for opportunities to keep them by their side. It’s also important for dogs too to be with people and live their lives to the full.
In France or Germany dogs are welcomed almost everywhere. When we took our two girls for a long weekend to Paris, oh what a joy it was to amble into a ‘café au coin’ together and not be subjected to the usual doggy interrogations. Even the motorway service stations allow dogs into the main restaurants areas – we were gobsmacked and relieved as the soaring temperatures meant leaving them unattended in the car was out of the question. Their forward thinking approach is something we Brits could learn from.
We take on board concerns from people who may  be allergic or fearful of dogs, or even worries that a dog might deface a place in seconds. We wax lyrical about the times a Sunday lunch in a choice gastro pub has been disturbed by a screaming toddler. It’s something that we dread.
What we find is that dogs actually enhance the vibe anywhere you go. Its proven that simply having a dog in a room lowers peoples’ blood pressure, makes you smile, and gets people talking. What bad about that?
If your pooch is well behaved and isn’t a nuisance, what’s the problem? Just remember: “Be Dog Friendly”! And tell us of some of the establishments you and your mutt frequent.
Barking Blondes by Jo Good & Anna Webb, published by Hamlyn, £12.99www.octopusbooks.co.uk


A rescued dog has swapped the shelter for the spotlight after becoming an internet sensation on social media site, Instagram.
Whether she’s snoozing happily in a hoodie or smiling playfully for the camera, the loveable Jack Russell cross has managed to capture the hearts of doting dog fans the world over.
With over 300,000 followers, seven-year-old Ginny is one of the most popular dogs on the internet and now receives bundles of fan mail every month. 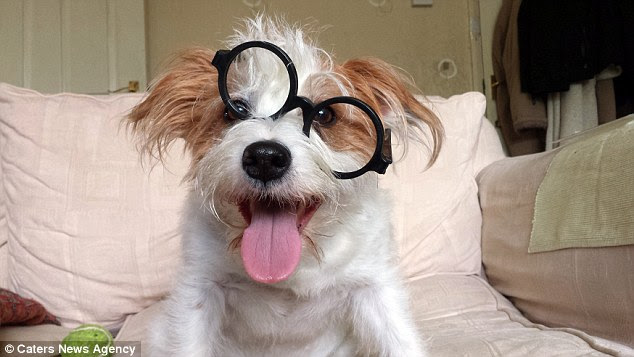 +6
Ginny the Jack Russell has more than 30,000 followers on Instagram seeking the latest updates on her life 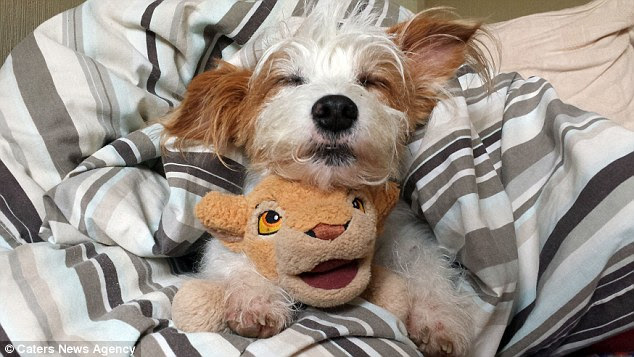 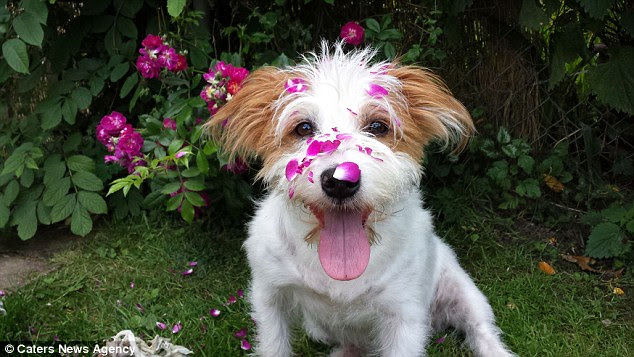 +6
The small dog suffered from a terrible skin condition which caused her to lose most of her fur
But life wasn’t always this good for the cute canine, who after being adopted from a local dogs home, suddenly developed a a severe skin allergy that caused her to lose most of her fur.
Luckily, Oxfordshire based owner Chelsea Hope-England recognised Ginny’s potential managed to nurse the dog back to health.
After coming across an Instagram account dedicated entirely to a small Malteste dog, Ms Hope was inspired to set up a page for her own beloved pet, but had no idea it would become so popular.
She said: 'Ginny likes sleeping and not wasting precious energy unless it’s to walk to her food bowl, so getting a photo is no problem at all.
'She also really loves the attention she gets after a photo has been taken so it’s easy for me to capture her shenanigans.
'Clothes don’t seem to bother her one bit, she’s always had clothes, because not long after I adopted Ginny she had a severe skin allergy and eczema, so she lost a lot of her fur and while we waited for it to grow back and for the medication to help her, she wore coats and jumpers so she didn’t get cold.
'She’s a bundle of lazy, although she can at times be energetic, always willing to eat and very happy 99 per cent of the time.' 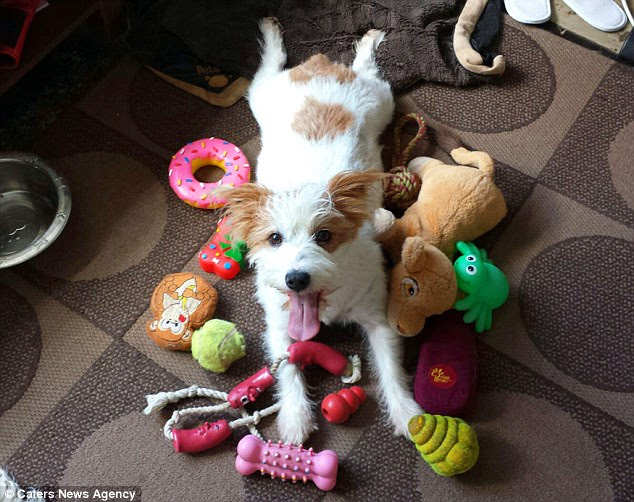 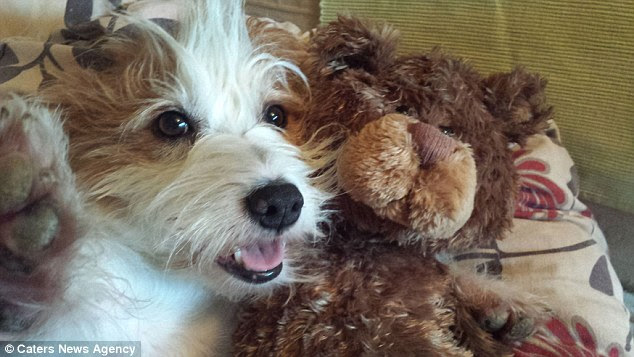 +6
Ginny, pictured, poses with a range of cuddly toys, clothes and dog toys for her legion of internet-based fans 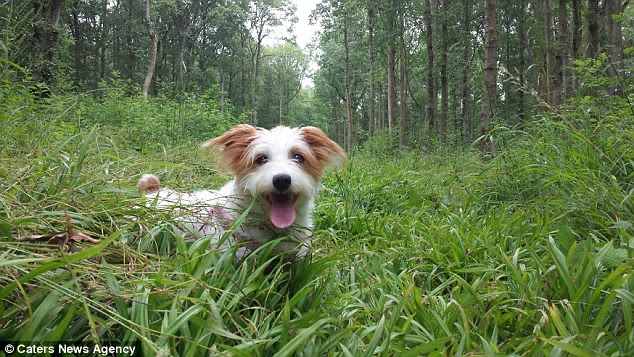 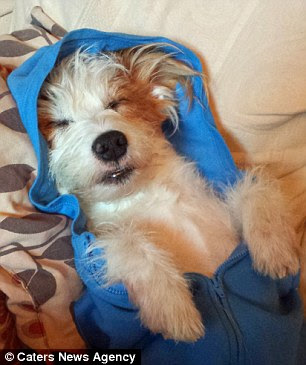 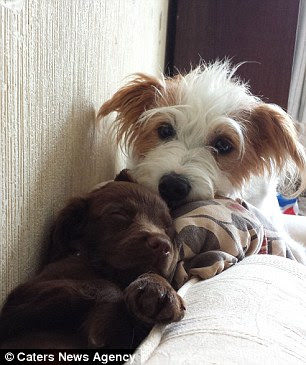 Ms Hope-England said: 'I am obsessed with her and to be honest she has a far more interesting life than I do'

Are you a book hoarder? There's a word for that.

How many books is too many books? What makes you a book hoarder? What do you do when you have too many?
In Japanese, there’s a word for it: tsundoku. It’s a noun that describes a person who buys books and doesn’t read them, and then lets them pile up on the floor, on shelves, and assorted pieces of furniture.
How many books is too many? (Genaro Molina / Los Angeles Times)
Frank Rose had a tsundoku problem. After he retired several years ago from his job as a state employee -- he lives in Sacramento -- he accelerated his purchases. Two years ago, he told the Friends of the Arden-Dimick Library in Sacramento that he’d donate his books when he died, the Sacramento Bee reports. By this summer, his collection had grown to 13,000 volumes.
Finally, this month, Rose, 85, decided he didn’t want to wait any longer. Library volunteers this week began packing the books -- 500 boxes' worth. It was the biggest donation in the library’s history.
A library official told the Bee that “we’re glad he didn’t have to die to give it to us.”
“I bought all of them, so that I could read them when I retired,” Rose says in a video posted by the newspaper on YouTube.
The writer and critic Rachel Kramer Bussel approached her tsundoku problem differently.

“I wish I could honestly answer ‘there’s no such thing as too many books,’ but as I learned from experience, that’s not true,” she wrote for the Toast. She hired a trash removal service to “cart away hundreds of books — read and unread, purchased lovingly or attained at book parties or conferences” from the two-bedroom apartment where she’d lived for 13 years.
“The most heartbreaking part was seeing anthologies I’d edited, with my name right there on the cover, being swept away into giant garbage cans.” That’s a fairly hard-core way to deal with your tsundoku problem. I’ll never throw a book with my name on the cover into a trash can -- among other things, it seems like bad writer karma.
“Lest you think I’m too awful a person to have let so many books find their way into a New York City dump, I will tell you that I tried to let my books go gently in the months preceding my move,” Bussel wrote. “I donated hundreds to bookstores the Strand and Housing Works.”
Bussel says she still owns more than 2,000 books. She points out that Shelfari'sCompulsive Book Hoarders group will grant you membership if you own a mere 1,000. It's a figure that this book lover thinks is way too low.

http://www.latimes.com/books/jacketcopy/la-et-jc-book-hoarding-tsundoku-20140724-story.html
Posted by LisaH at 13:24 No comments: