Down the ancient corridors through the gates of time, run the ghosts of dreams that we have left behind..
- Dan Fogelberg

Authentic Wensleydale is only made at the Wensleydale Creamery in Yorkshire. Make these scones for a quick, savoury snack – they’ll become a crowd favourite in no time.

A classic scone is a great recipe to master. These light as air scones are made with buttermilk for extra richness. Serve for an afternoon tea with clotted cream and strawberry jam.

Our freezable cheese scones take just 30 minutes to bake and make a great emergency snack that cooks straight from frozen. The toasted walnuts give them a little extra crunch

Manchego cheese and smoked paprika give these bite-sized scones a very grown-up twist. Serve them with your favourite meal or just simply have them on their own for a quick snack.

Savoury scones make a great alternative to serve for an afternoon tea with some good cheese and chutney. These ones are flavoured with sage and given extra texture from grated apple.

This savoury scone recipe is easy to make, and is ready in under an hour. Whether you’re expecting guests or want to treat a loved one, this spring onion scone with cheshire and mustard is perfect for entertaining and an easy sharer.

These walnut and roquefort scones combine a classic flavour combination of blue cheese and walnuts with one of our favourite tea time treats. Serve warm and slathered in melting butter.

Scones for starters? Greg Marchand of Frenchie in Covent Garden gives us the secret to his light and fluffy scones infused with maple syrup and studded with smoked bacon
https://www.olivemagazine.com/guides/best-ever/best-scone-recipes/ 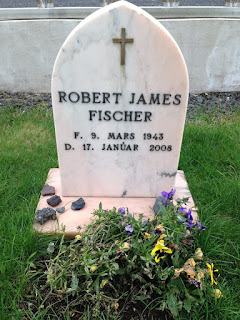 About 40 miles southeast of Reykjavík near the village of Selfoss, Iceland, lie the remains of Robert James Fischer, better known to the world as Bobby Fischer. The simple gravesite is found next to the Lutheran Church in Laugardælir along an unmarked road.


Fischer burst onto the chess scene at the tender age of 14, capturing the U.S. Championships, and the following year he became the youngest world grandmaster. Brash, stubborn, and difficult even during the best of times, Fischer’s legacy reached rockstar status 15 years later when he faced off against Russian Boris Spassky at the 1972 World Chess Championships in Reykjavik.
Billed as “Match of the Century” and played at the height of cold war tensions, the combatants created an electric atmosphere rivaling that of any heavyweight title fight. The styles of the two men couldn’t have been more different; Spasky, stoic and disciplined, played an emotionless, methodical game. His eccentric, vocal rival, however, eschewed protocol and traditional strategy with the flair and nerve of a riverboat gambler.
The world tuned in with unprecedented fascination, wondering if the young American could dethrone his mighty foe and end Russian dominance over the sport. Finally, on September 3, 1972, after 21 games filled with heightened tension, drama and psychological warfare, Fischer soundly defeated his Soviet opponent to become the first American-born world champ. Chess would never be the same.
Fischer returned home to a hero’s welcome, appearing on popular talk shows as well as the cover of Sports Illustrated. But fame and fortune would soon take an ugly turn as he became increasingly erratic and volatile, making unreasonable demands and indefensible anti-Semitic and racist comments.
Facing criminal charges in the U.S. for tax evasion and playing in sanctioned countries,  including a rematch with Spassky in the former Yugoslavia (Fischer won), he eventually found refuge in Iceland. Fischer died in the country on January 17, 2008, and was buried in a small, secret, and possibly illegal ceremony that even the churchyard minister was unaware of.

We live between the act of awakening and the act of surrender. Each morning, we awaken to the light and the invitation to a new day in the world of time; each night, we surrender to the dark to be taken to play in the world of dreams where time is no more.
John O'Donohue
Photography Mike Thomas

26 June at 13:00 ·
Badgers
In the dark dank undergrowth of green
Where sunshine seldom will be seen
In their set the docile badgers lay
You’ll seldom ever see them in the day
But very late at night when up on high
The fair moonlight shimmers in the sky
And the silver stars shine out
With not another soul about
Then you could hear a grunt and sigh
and if you happened to pass by
see first a quivering snuffling snout
As old Brock shuffles slowly out
He’ll waddle, belly close to ground
His movements hardly make a sound
As he seeks his night repast
In natures larder oh so vast
Mother badger roams there too
To gather food for babies new
Watching, needs to be aware
Of any dangers lurking there
As sometimes baby badgers tumble
But hearing mothers warning rumble
Disappear into the night
Before marauders come in sight
Pamela M Brooke
Art Nigel Artingstall British Wildlife Artist

Email ThisBlogThis!Share to TwitterShare to FacebookShare to Pinterest
Labels: Animals

The Dapple and the Huskie

The Dapple and the Huskie
The Dapple and the Huskie were inseparable friends.
They vowed they would never separate even to the very end.
When the meadows were all green
And wildflowers sprinkled the hills in the spring,
The Huskie and the Dapple would fly with the wind
Over the fields findings no end.
In the summer sun, they would roll in the grass
Then curl up with each other for a little rest.
Fall, though, was best of all. The wind caught the leaves up in a flurry
And Dapple and Huskie would after them scurry!
But knowing that winter was soon to follow
They began preparing their nest for tomorrow.
Winter surprised them earlier than expected.
For Dapple and Huskie it was totally unpredicted!
Trying to hurry in making their nest,
Well, they got separated and the result was a mess.
The storm had no mercy on Dapple or Huskie.
Drifting changed everything leaving nothing as it should be.
Dapple called for Huskie. Huskie called for Dapple.
Above the storm’s roar, to hear they were not able to.
Defeated, Huskie curled up next to a rock.
Hoping somehow the snow would be blocked.
Meanwhile, Dapple continued to look.
His body was so tired and cold that he shook.
But Dapple remembered the promise they’d made.
So frozen or not on the trail he stayed.
He repeated to himself, “Friends to the end.”
Then he would shake the snow loose and start again.
In a distance, above the winter storm’s roar
The whine of a friend that made Dapple’s heart soar!
Forcing his way, though weak and half frozen,
Dapple listened for the sound and began to close in.
There! Dapple spotted a small dark spot
Nestled in close to a fifty - foot - drop.
Dapple started talking in a soft voice, “My friend,
Remember our promise, we’re friends ‘til the end.”
Repeating this over and over Dapple reached Huskie.
“Don’t move my friend, stay right where you be.”
Huskie didn’t move an inch. Dapple grabbed a tree limb.
Threw it toward Huskie barely reaching him.
Huskie grabbed hold of the limb and climbed aboard.
Dapple pulled the tree limb telling Huskie, “Safe a shore!”
The two found their nest and what a relief.
It didn’t take long, they were both sound asleep.
By CJ Boots Vail
Art CJ Boots Vail 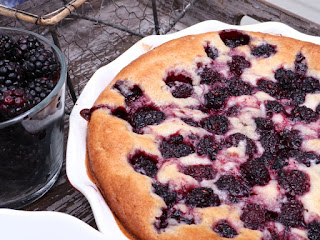 Ingredients
Instructions
Notes
Baking times will vary based on the pan size that you use. 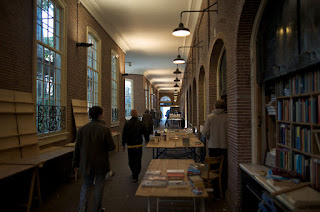 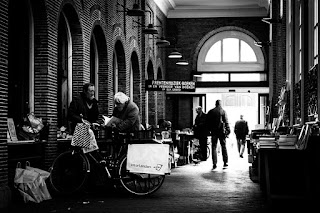 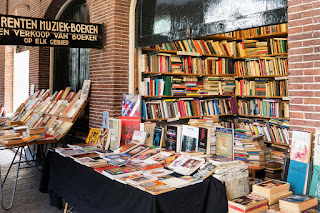 Now part of University of Amsterdam’s law faculty, this ancient passage filled with stalls selling used books is filled with many ghosts, from cholera patients to Vincent Van Gogh.


If you enter Oudemanhuispoort through the Oudezijds Achterburgwal side, you will get one allusion to this passage’s past. Overhead, chiseled into a pediment, is a set of spectacles referring to old age. Indeed, “Old Man’s House Passage” once acted as part of the Netherlands’ first senior citizen home back in the 18th century. Now part of the University of Amsterdam, it actually has a 400-year-old history that has seen it be home to a convent, a hospital for cholera victims, an arts academy, and a museum that formed the basis for the Rijksmuseum and its famous collection of Rembrandts and Vermeers.
Since 1886, the stalls of this covered walkway have been selling second hand prints, sheet music, and books. The stalls are currently run by an older generation of fellows—many with spectacles—who are only too willing to share their knowledge. Perhaps some even have secondhand stories about Vincent van Gogh browsing here for inspiration. For example, it’s been said that it was here that everyone’s favorite earless genius found the Japanese prints that he found so inspiring, changing the course of Western art.
Imagine what you might find…